RSS
← Conferences at Half the Cost
Read Your Boss’ Blog →

How to Lose King of the Mountain 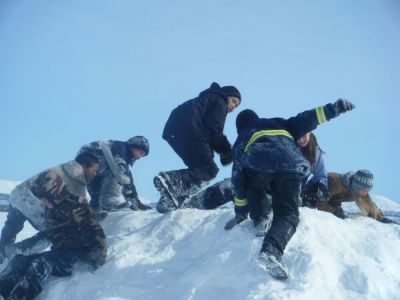 I find myself doing it all the time.

I would have caught that typo.  If I were in charge, the church service wouldn’t go long as often as it does.  I can’t believe they are singing that song… again.  My meetings aren’t nearly this painfully boring.  We’re spending how much on printing and copy chargebacks?!

There are days when I’m convinced that I could do everyone’s job better than they’re currently doing them… staff and/or volunteers.  I’m busy enough as it is and I know that I couldn’t actually do everyone’s jobs. However, if I’m not careful, I start playing that game in my head.  I doubt I’m the only one.

A few years back, I was having coffee with a respected friend of mine when he called me out on my King of the Mountain mindset.  He challenged me to consider trying to lose the battle I had been fighting in my head.  He told me that I might need to realign the way I think about church and staff structures and leadership roles.  There were two things he suggested that I put into practice that I want to share with you today:

Make A Thousand Thank You Cards

(right now, my friends are trying to think back to the last thank you card I wrote them…)

A couple things happened when I started doing this.  I had to start paying close attention to those people that bugged me the most, so that I’d have things to thank them for the next time they frustrated me.  Rather than watch for things they were doing wrong, I started focusing on all of the things they were great at.  Not only that, but I never actually made A Thousand cards… I think I made 60.  So, my supplies were limited and I had to wrestle through whether it was worth getting frustrated and getting rid of one of my few cards.  I often found that it wasn’t worth it and I started actually letting things go before I even let them begin to settle into my heart.

Get on Their Team

The only other suggestion was a neat one, but one that still takes some work and commitment.  My friend pushed me to consider looking at our church as a piece of a much larger mountain… instead of a church of many mountains (departments), with me as the king of my own.  To put my money where my mouth was, he told me that I needed to volunteer and be a part of the ministry areas that frustrated me the most.  It’s a lot easier to get frustrated with a situation that you’re simply observing – it’s much harder to throw rocks when it’s a glass house that you’re responsible for.

A couple things came from that – I started a habit of volunteering in ministry areas that weren’t “my own” so that I would have some ownership over the problems and complexities involved in those areas (I’ll be honest, I got involved in areas I was frustrated with and areas that I loved – I didn’t want to just get involved in areas I wanted to “fix” – I wanted to feel like I was a part of a bigger team).  I also noticed that, by volunteering in other ministry areas, I was able to learn tips and tricks about caring for volunteers.  At the time, it had been YEARS since I had been the volunteer hands-and-feet of a ministry… getting back to volunteering made me think through how I was caring for and preparing my volunteer teams to succeed.

I was encouraged to write this post a few weeks ago by that same friend who, as he likes to do, was checking in on my “king of the mountain” mindset.  Practicing the couple suggestions he gave me continues to shape the way I think of our church and our ministry teams.  Deciding to put this into practice takes some commitment – you might feel like you don’t have time to volunteer in other areas or you might hate making thank you cards.  If you’re feeling that way – maybe this is exactly what you need.  Consider trying it for a week.  And, if you have thoughts or things to add, you can always post them in the comments section.

Posted by Anthony Prince on February 9, 2011 in Kidmin

← Conferences at Half the Cost
Read Your Boss’ Blog →

5 responses to “How to Lose King of the Mountain”